CREDIT BANK OF MOSCOW was awarded by the European Bank for Reconstruction and Development (EBRD) as the "Most Active Issuing Bank in Russia in short-term trade finance" under the EBRD’s Trade Facilitation Program (TFP) in 2011.

The awarding ceremony was held in London on the 17th of May 2012 during the Annual Meeting of EBRD Board of Governors. Pavel Voronov, Director of International Business and Financial Institutions Division of CREDIT BANK OF MOSCOW, received the award. 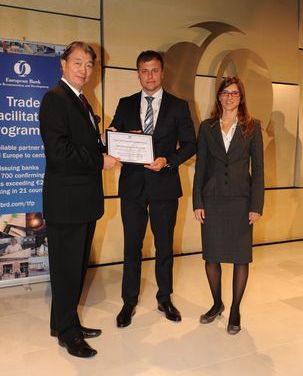 In 2010 The Bank received similar award from EBRD and was also awarded by the International Finance Corporation (IFC) as the "Most Active Issuing Bank in Eastern Europe" under IFC’s Global Trade Finance Program (GTFP).

Cooperation with the EBRD under its TFP lasts more than 7 years, during which CBM’s guarantee line for export-import transactions financing was gradually increased from US$15mln to US$100mln. Moreover, cooperation with other banks-participants of the EBRD’s TFP, allowed CBM to extend its set of partners and geographic reach.

The EBRD’s TFP aims to promote foreign trade to, from and within central and eastern Europe, the Commonwealth of Independent States (CIS) and the Southern and Eastern Mediterranean (SEMED) region. Through the Programme, the EBRD provides guarantees to international commercial banks (confirming banks). In so doing, it takes the political and commercial payment risk of transactions undertaken by participating banks (issuing banks) in the EBRD’s countries of operations. There are 102 issuing banks in 20 countries of EBRD’s operations participating in the Programme, together with over 800 confirming banks and their subsidiaries throughout the world.