Astana, May 21, 2011 — CREDIT BANK OF MOSCOW was recognized by the European Bank for Reconstruction and Development (EBRD) as the "Most Active Issuing Bank in Russia in short-term trade finance" under the EBRD’s Trade Facilitation Program (TFP) in 2010. The awarding ceremony was held in Astana (Kazakhstan) during the EBRD’s Annual Meeting and Business Forum. 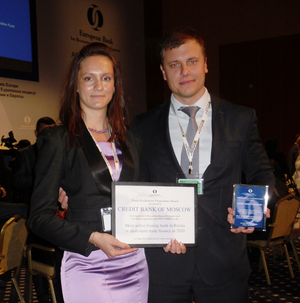 In 2010 CBM facilitated 259 trade deals for the total amount of US$408mio including those facilitated via international trade finance programs. Since the beginning of 2011 the Bank’s trade finance portfolio has already reached US$305mio and its volume is expected to increase by 70% by the end of this year as compared to YE 2010.

Cooperation with the EBRD under its TFP began in 2005. During six years of close and fruitful collaboration with this institution, CBM’s credit line for export-import transactions financing was gradually increased from US$15mio to US$77mio. Being one of the participants of the EBRD’s TFP, the Bank has managed to extend its set of partners as well as geographic reach operating with the foreign banks involved in trade finance business all over the world.

Earlier CBM was recognized by the EBRD as the "Most Active Factoring Bank in Russia in 2008″. The credit line in the amount of US$20mio granted to the Bank was the first one from the EBRD to support factoring in Russia.

CREDIT BANK OF MOSCOW was also awarded by the International Finance Corporation (IFC) for its outstanding performance and excellent cooperation in trade finance area having won the nomination "The Most Active Issuing Bank in Europe and Central Asia" under IFC’s Global Trade Finance Program (GTFP) in 2008 and 2009.