CREDIT BANK OF MOSCOW (CBM) was recognized by the International Finance Corporation (IFC) as the “Most Active Issuing Bank in Eastern Europe” in IFC’s Global Trade Finance Program (GTFP) in 2010. CBM was awarded the recognition on 25 May 2011 at IFC’s annual GTFP Bank Partners Meeting, held this year in Istanbul. 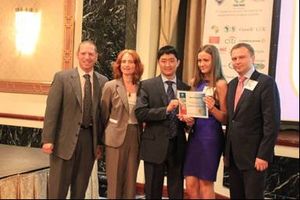 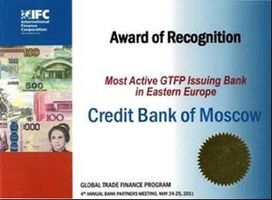 During 2010 the bank participated in more than 50 GTFP-supported transactions for US$140mln in value. This was the third year in a row that IFC has recognized CREDIT BANK OF MOSCOW for its outstanding activity in the GTFP program.

Launched in 2005, IFC’s Global Trade Finance Program helps to facilitate trade into and between emerging markets by providing risk mitigation on trade-related transactions with partner issuing banks such as CREDIT BANK OF MOSCOW. Through the GTFP bank network, local financial institutions can establish working partnerships with a vast number of major international and regional confirming banks in the program, thus broadening access to finance. By tapping the risk mitigation provided by the GTFP, international trade finance providers can enhance their global reach confidently, gain familiarity in new markets, and build relationships with quality counterparty banks in growth markets around the world.

IFC provides partial or full guarantees for individual trade transactions throughout its network of more than 200 issuing banks in over 80 countries. From the start of GTFP operation, more than 9,100 guarantees have been issued supporting over US$12bln in trade finance transactions.

CREDIT BANK OF MOSCOW was the first issuing bank in Russia to join the IFC GTFP program in 2006. CBM started the GTFP program with a US$10mio uncommitted trade finance guarantee facility, which has grown year by year as the bank has scaled up its trade finance and other international business activity, and which is now US$140mio.