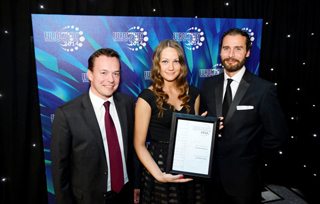 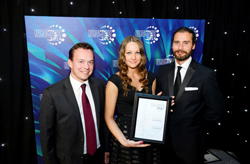 On 10th of July 2014 CREDIT BANK OF MOSCOW was named "Best Bank in Russia" by the international magazine Euromoney for achievements in the financial sector as a part of the "Awards for Excellence 2014" ceremony.

The award ceremony was held in London and attended by leading bankers from across the world.

This is the first victory in this nomination for CREDIT BANK OF MOSCOW and, according to Euromoney, this year the award went to "one of the country's rising stars".

The Awards for Excellence accolade granted at the annual ceremony, is considered to be one of the most prestigious in the sphere of international financial services. The selection of winners is made by an independent jury composed of world-class experts, financial media editors, journalists and analysts. Euromoney highlighted the fact that CREDIT BANK OF MOSCOW's rapid expansion has been matched by stellar profitability, strong capitalization and very low impairment levels.

The strong fundamentals and business positions earned the Bank upgrades from Standard & Poor's and Fitch, which last year raised the Bank's credit ratings to BB- and BB respectively. International investors have also warmed to the Bank's strong positions and growth story, which was reflected in successful debt raising in the international capital markets in 2013.

"The award "Best Bank in Russia" received by CREDIT BANK OF MOSCOW primarily serves as evidence of high international recognition of Russian privately-owned banks. The fact, that our bank became a benchmark in the Russian banking industry, once again confirms that its chosen strategy is correct" – commented Eric de Beauchamp, Chief Financial Officer of the Bank.