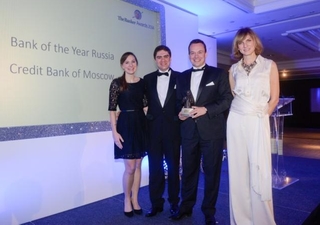 It is for the first time that the Bank has been awarded by The Banker, and the jury praised such factors as its high operating efficiency and return on equity, and good quality of its loan portfolio.

The winners were selected based not only on their financial indicators, but also on their achievements and advantages that allowed them to strengthen their market positions, and on their strategy of further development.

The Banker’s recognition is one of the most prestigious awards in the international finance industry, and the “Bank of the Year” title is contested by leading banks of the world. In Russia, more than 10 financial institutions were nominated, of which the one whose performance impressed the judges the most was CREDIT BANK OF MOSCOW with its operations, though confined to Moscow and Moscow Region, developing at an outstanding pace without compromising its consistently high indicators of quality.

This is the third award of that kind received by the Bank from financial market experts. In early 2014 CREDIT BANK OF MOSCOW was named the Bank of the Year 2013 by the leading Russian banking information portal Banki.ru, while this summer it was named the Best Bank in Russia for achievements in the financial sector at Euromoney’s Awards for Excellence 2014 annual ceremony.